The words “inexpensive” and “3D printer” combined would have sounded like science fiction just a decade ago when this budding technology was still mostly reserved for companies and dedicated enthusiasts who were paving the way for what was to become 3D printing’s current explosive growth. The patents that were holding the field back soon expired, and the subsequent wave of innovation closely followed by a surge of interest by the media soon followed.

The result was definitely a net positive – more people were exposed to the technology and companies started dividing their attention between creating printers for industrial and medical application and the home user.

While there have been a couple of bad eggs in the form of not-so-transparent crowdfunding campaigns and unrealized promises, we’ve ultimately been blessed with 3D printers that are less buggy, faster, more accurate and, best of all, cheaper.

There’s never been a better time to buy your first 3D printer as manufacturers have recognized the great potential that lies in making inexpensive, but high-quality models that offer the end user everything they need to jump straight in and start creating stuff, be they a seasoned maker or a wide-eyed schoolchild.

The increase in exposure has led to a great demand for 3D printers both as innovative teaching tools and money-saving devices for home use, and manufacturers worldwide are happy to oblige, with costs plummeting as a welcome side effect no one objects to.

The trouble is, as the demand for accessible 3D printers is surging, so is the supply of new models whose quality is often less than stellar. Cheap knock-offs are aplenty, and some manufacturers cheap out on the materials that go into their 3D printers to keep the costs low while print quality takes a serious hit too.

The five proven models that are reviewed below don’t suffer from these shortcomings and one of them is likely to have all that you’re looking for in the best budget 3D printer for your needs.

The following five 3D printers have been chosen based on one or more outstanding qualities, as well as all-around appealing prices. Some excel at their print quality, others are more portable or can work with a wider array of filaments which adds to their versatility.

Since we’re talking about budget printers after all, some more advanced features like twin nozzles, support for more exotic material types like nylon, or print areas that can accommodate big prints are naturally out of the question.

Still, it’s remarkable what you can get today for $500 or less, considering that not too long ago anything that hovered around the four digit mark would have been considered as budget-friendly as the showcased printers are today. The fact that you can’t go wrong with any of them is a true testament to the rapidly advancing 3D printing world as each offers outstanding value for the money.

The FlashForge Creator Pro is one of the most well-received and recognizable 3D printers in recent years, its considerable price has kept novices from pulling the trigger on one though. FlashForge soon started developing a printer with a smaller area and a few less bells and whistles to work with, but at less than half the cost of the original. People were sold on the idea, and the Finder became a nearly instant success.

Beneath its large colorful plastic exterior lies a solid PLA printer capable of producing quality prints for its price fairly quickly and with no previous knowledge. Everything has been pre-assembled and setting the finder to work on its first print job is possible as soon as you’re done with the guided calibration process.

Connection options abound as it can access print projects from the 4GB SD card that comes with it and from external sources through either USB or Wi-Fi.

You’ll have to settle for printing exclusively with PLA since there’s no heat bed, and will probably replace the complementary spool with better quality material when you can, but neither of these take away from the fact that FlashForge’s Finder is a solid first choice with enough features to keep you interested in it well past the beginner stage. 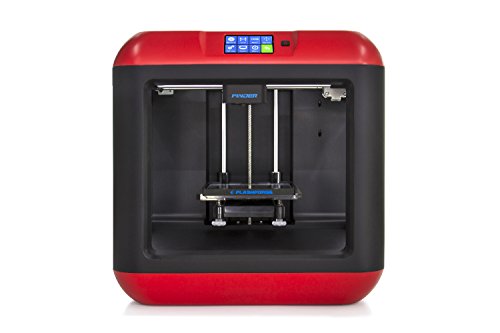 Next, we have a reiteration of an earlier successful model. While the original Jr. was considered an accurate and fast beginner-friendly printer, it took a lot of flak for supporting only proprietary filament. XYZprinting have included 3rd party filament support in the Pro model. You’ll have to find a way to hang the spool onto the printer, but that’s a small bother compared to the advantages.

Compared to the Finder, it has a somewhat larger printing area and will level itself automatically so you don’t have to. If you feel that you’ve mastered the basics and want to take a more active role in the outcome of its prints, the da Vinci Jr. Pro offers precise control of its print speed, temperature settings and more through an intuitive software suite. Upgrades to its already formidable printing accuracy are available through the separate purchase of a smaller nozzle.

You won’t be using this model to print with ABS either, but the PLA prints it creates come relatively close with the help of its advanced nozzle and the powerful cooling fan next to it. When finding faults with it, you have to resort to nitpicking about stuff like its flimsy analogue keypad or the lack of onboard Wi-Fi, which goes to show how well the da Vinci Jr.’s successor turned out. 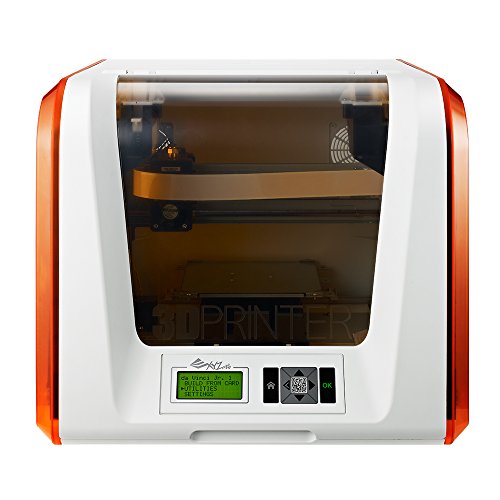 So far only bulky 3D printers have been mentioned, the kind you have to clear a sizable portion of your desk for in order to even fit on it.

Knowing that bigger isn’t necessarily always better, iNSTONE created a smaller, more compact 3D printer that’s just the right size and weight for hobbyist home use and taking along with you to demonstrate how it works in person, whether for teaching purposes or for fun.

Smartly designed and as small as it can be without encroaching on the modest print area, this model is a study in the efficient use of space and material.

While everything about it from only one knob that controls most of the options, to the software the printer ships with could be described as basic, the prints created with it, if small, are nothing but. The accuracy is on par with more expensive models and less complex items are done in a jiffy.

Even small prints can take hours to complete if they’re intricate enough, and iNSTONE’s mini 3D printer sadly doesn’t offer a way to resume them should a power outage occur.

This and the fact that you’ll need to make doubly sure that the filament is stuck to the print bed when starting new prints aside, this small, inexpensive model is the perfect first printer for a child or an undemanding adult. 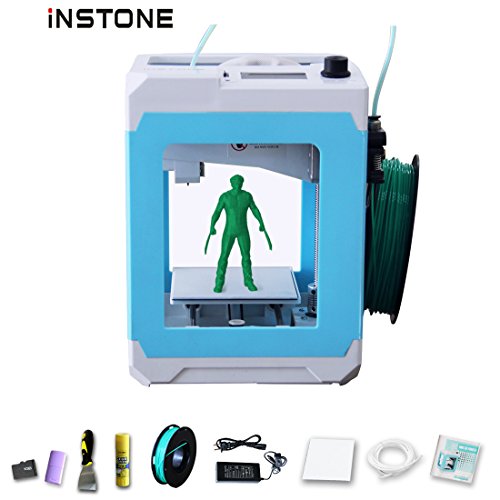 The i3 Mega almost didn’t make it onto the list as it is the most expensive printer of the lot, but the extra $100 you’d invest in it over Qidi’s or XYZprinting’s models is a small additional cost to pay for a futureproof 3D printing solution you’ll have no trouble learning with as an absolute beginner and then using to its full potential a year or two down the road.

One of the compelling reasons to purchase it is the Mega’s solid steel frame. Connected to the print end and wired up, it provides the rock solid stability detailed prints need in order to turn out flawless, and they do, if at a pace that’s a bit slower than others. The noise its fans make could have been toned down a little too, but once that figurine or curtain hanger is done and you behold its smooth form, the waiting will have been worth it.

Everything about the Mega, from its deep but easily understandable touchscreen controls through the myriad accessories and generous amount of starting filament, all the way to the inclusion of a quality heated bed you can use to print with ABS or make printing with PLA less likely to fail, suggests that Anycubic has done their best in packing as many thoughtful features into it as they could without making the result prohibitively expensive. Spend a little bit extra on it now and enjoy its performance through the scores of prints it will produce flawlessly. 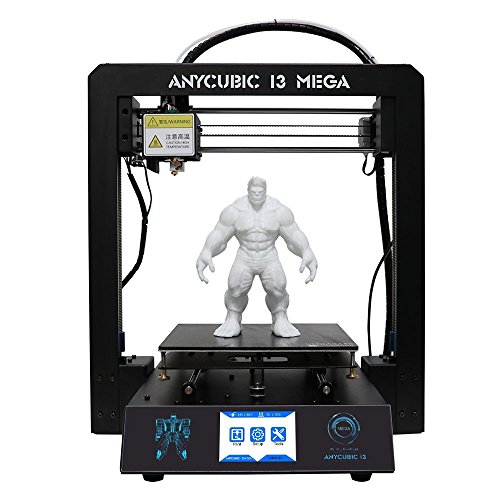 The last 3D printer on the list is also unquestionably the heaviest. While it won’t go easy on your desk (or ears for that matter), the X-one2’s sizeable mass is justified as it goes a long way in making sure that each print is perfectly aligned, straight, and doesn’t have any flaws apart from stringing which one would expect anyway.

It takes advantage of manufacturers’ willingness to share patents and enrich the field in general, giving back with an excellent price and outstanding customer support, to say nothing about the actual quality of its work.

It is most comparable to the FlashForge Finder in terms of printing area, speed, supported printing and even the somewhat inefficient use of space.

Still, it is distinguished by a quality machined metal frame, an LCD display you can preview any supported file on before deciding on bringing it to life, and a high quality aluminum bed that’s heated and requires no additional means of providing stability for PLA and ABS prints.

It’s a 3D printer whose size and weight may present a problem for people with smaller living or working spaces, but which puts out prints of above average quality in a speedy manner.

Getting one as your entry into the world of making is therefore a sound idea. Qidi intended it as a budget printer whose capabilities grow with the user’s skill, and as such it handles itself pretty well. 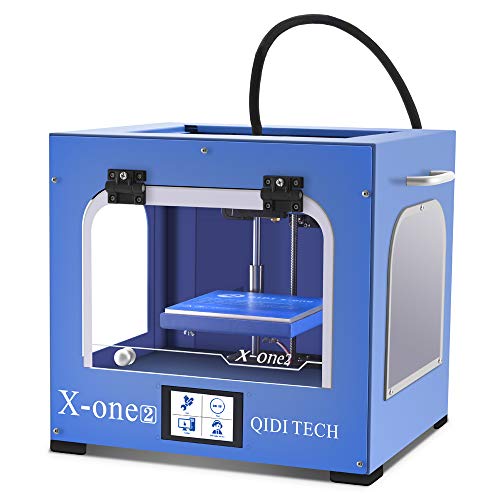 “What will I be using this for?” That’s the central question you’ll want to ask yourself before spending money on any 3D printer, and a clear answer will already bring you a lot closer to the ultimate choice.

Smaller items you’ll either use around the house or for our own amusement don’t need to be as detailed and the printer that made them can be something as simple as the Mini from iNSTONE.

More impressive and complex prints you may wish to start selling to others or giving out as genuinely unique gifts may benefit more from the i3 Mega’s bigger size and steady touch.

Whichever way your budgetary constraints, creativity and plans for the future may take you, a 3D printer will prove to be a welcome addition to your arsenal of hi-tech gadgets, although it probably outshines most of them with the sheer number of possibilities for learning, creative expression and innovation.

We’re lucky to be the contemporaries to this rapidly developing technology and are already reaping benefits from it.

Who knows, by the time you’ve decided that one of these budget 3D printers has offered all it can, the more advanced model you’ll set your sights on may cost as much as these entry-level ones do now. That’s a future worth looking forward to and working towards, don’t you think?